Our commitment to service traces its roots back to 1944 when veteran volunteers first began helping veterans of World War II obtain the benefits promised them by the federal government. As the number of returning veterans swelled into the millions, it was evident that some sort of nationally organized assistance for them would be needed. The older established national groups wouldn’t do; the leaders of this new generation of veterans wanted their own organization.

Since then, the original charter has been amended several times to admit as members those who served in different eras. Today, membership in AMVETS is open to anyone who is currently serving, or who has honorably served, in the U.S. Armed Forces from World War II to the present, to include the National Guard and Reserves.

As a volunteer-led organization, we annually elect and/or appoint officers at the national, district, department and post levels. Each August, representatives from these levels attend the AMVETS national convention to make decisions on issues affecting veterans and the organization.

The AMVETS organization has grown and evolved over the years to best serve each new generation of veterans and their families. Explore this website to appreciate the services, programs and public policy impact we drive every day across the United States.

As the organization moves further into the 21st century, it does so with the conviction that its focus on preserving freedom, supporting America’s defenders and serving her communities remains a clear blueprint for continued service to God and country. 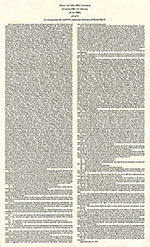